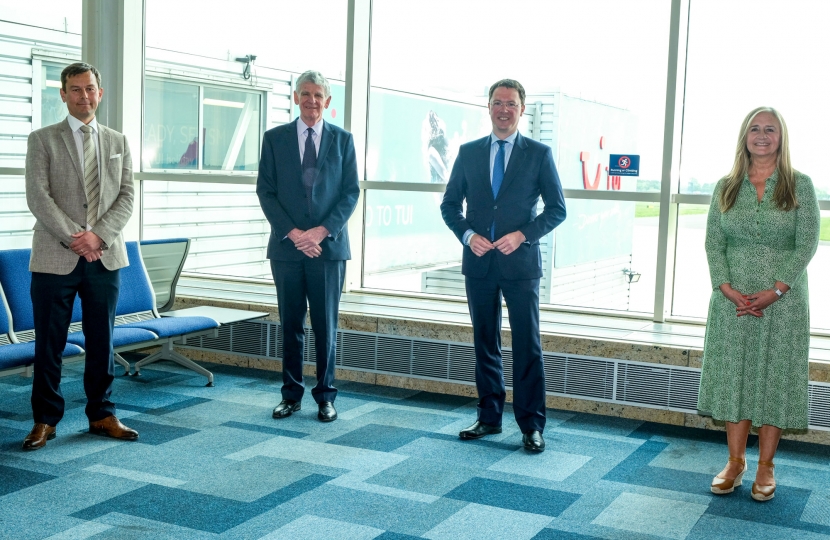 As found in: ADS Advance

Prior to the Government’s announcement regarding changes to international travel yesterday, which included moving popular holiday destination to the amber list, airport representatives put forward their concerns to the Minister who has responsibility for aviation and maritime in his role of Parliamentary Under-Secretary for the Department for Transport (DfT).  Discussions included the impact the restrictions are having on the aviation industry, the need for more green list destinations and a request for clarity on restart dates which were hampering efforts to kickstart customer confidence.

The DSA leadership team outlined the difficulties the airport had faced over the last 18-months, whilst remaining operational for cargo and freight and essential travel throughout the pandemic.  The airport team was keen to stress that Government support, such as the furlough scheme and the Airport and Ground Operations Support Scheme (AGOSS) had been critical during the pandemic.  However, without more of its popular holiday destinations joining the green list, or a definitive date for the start of discretionary travel, more Government support for the Aviation sector will be needed.

The leadership team were joined by Dawn Wilson, Managing Director for TUI Airways in asking the Minister to consider introducing an island policy, that will allow destinations to be added to the green list even if the mainland remains amber.  Doncaster Sheffield airport serves seven islands across Greece and Spain so the introduction of an island policy could provide almost 60% of its ordinary summer schedule for 2021 by unlocking an additional 230,000 passenger seats.

Following the removal of Faro from the green list, the airport has just 42 amber list destinations currently available and capacity cannot keep up with demand. Destinations must be added to the green travel list to improve customer confidence together with other considerations, such as improvements to border control and as simplification of the current testing regime, which are hampering the kickstart to international travel.

Despite the difficulties currently faced by the Aviation sector, DSA continues to grow strongly and is confident in its plans for future growth.

The airport is recognised as an economic catalyst for the region with the ability to attract growth and drive the creation of skilled jobs and opportunities. The leadership team updated the minister on the plan for GatewayEast, an employment district with the potential to provide up to 35,000 skilled jobs, develop 3,000 new homes and create £6.5bn to the local economy by 2037.

A partnership group comprising stakeholders from the Sheffield City Region (SCR) and Doncaster Council is working on a rail scheme to provide greater connectivity and investment to GatewayEast, a 1600-acre innovation district capable of delivering tens of thousands of highly skilled jobs, which is anchored by Doncaster Sheffield Airport.

Damian Allen, Chief Executive of Doncaster Council, said: “We have a tremendous working relationship with DSA and are supporting them to get through the pandemic. The partnership saw us deliver Great Yorkshire Way which unlocked significant new growth at the airport and thousands of new homes and jobs for the local economy. Our track record for implementing infrastructure schemes which deliver on the economic growth and jobs front is second to none.

“GatewayEast is another major project we are backing with the airport and Sheffield City Region. Our shared ambition is to develop a new Innovation Cluster with direct runway access focusing on future mobility, low carbon aviation and associated technologies such as innovation fuels, battery technology, electrification and light weighting technology.  It’s ‘ready to go’ and will deliver on the ‘levelling up’ agenda by bringing high skilled, well paid jobs to the region, boosting supply chains and making our economy more resilient. The associated Gateway East rail scheme is central to the project and would quadruple access to the airport growth hub for jobs and flights by a sustainable travel mode taking 23,000 tonnes of CO2 off the road network.”

Greater connectivity to unlock this economic potential would provide a powerful step forward in levelling up the North and building back better.  Both SCR and Doncaster Council remain fully committed to pursuing a rail connection that seamlessly integrates with other transport solutions.

Robert Hough MBE, Chairman of Peel Airports, expressed his thanks to the Minister for his visit: “It was very beneficial to be able to speak to Minister Courts today, providing us with the opportunity to share insights into the economic growth opportunity presented by Doncaster Sheffield Airport and the surrounding development of GatewayEast, which will truly have a positive impact in levelling up the North.

“The Minister appeared to have an appreciation of the current situation in terms of travel, but yesterday’s announcement was very disappointing. Faro was the only green list destination operating from DSA and we were hopeful that the list of viable leisure destinations would grow, not decrease.

“This demonstrates the importance of the need for clarity and transparency around the guidance for travel for our passengers. There was no warning about the changes made to Faro, despite previous promises about a ‘green watchlist’. The whole travel industry desperately needs more engagement and support from Government to safely get passengers back in the air once more.”