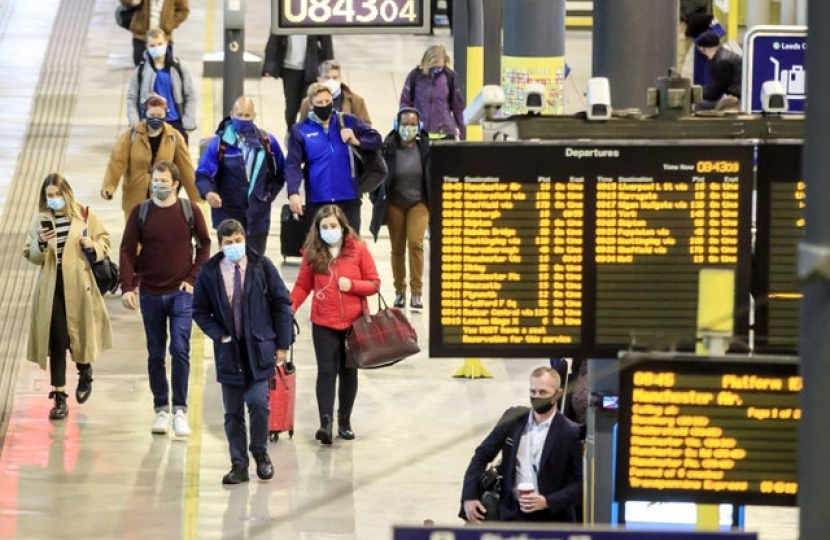 I RECENTLY spoke in a Westminster Hall debate on the need to level up the North. After all, along with getting Brexit done, this policy was one of the main reasons why Conservative MPs like me were elected.

I am not surprised, therefore, that questions are rightly being asked on when people across the North of England are going to see the benefits of this policy.

Yet, before we begin to talk about “levelling up”, let us remember that the money which will be invested into levelling up is not the Government’s – it is ours, the taxpayers.

So it is only right and proper that before any large financial investment in an infrastructure project is made, there is an economic case for that project to go ahead. This is why, for decades, the Treasury has used the Green Book to evaluate the merits of its investments.

The Green Book, among many things, ensures that any project goes through a five-case business plan. This is not only extremely important, but it is also very helpful.

Any plan must have a strategic case (what the project aims to achieve and why), an economic case (the final project’s value to the public purse), a commercial case (relating to a project’s procurement and deal structure), a financial case (ensuring the Government can afford the project) and, lastly, a management case (which asks if a project can be delivered successfully).

All this seems very sensible. I can clearly argue for all five points and to push forward spending our money without such a plan would be foolhardy. Yet, while projects in the North of England would pass four of these points with flying colours, they have repeatedly failed to pass the economic case.

This is not because such projects would be economically unviable; it is because of how the ‘economic case’ is measured. Now, as a Yorkshireman, I always want good value for money. It is in my blood. Yet, unfortunately in the Green Book, the economic case too often works against the North.

This does not mean the projects do not provide value for money. A project costing £1m in the North is still worth £1m. Essentially, the economic case is measured by calculating the value of the return the project provides to the taxpayer.

An example would be a stretch of road or rail in London. This would be used much more frequently simply due to the higher number of people that would use it compared to somewhere like Harrogate, which has a smaller population. The ‘economic case’ would therefore be skewed and be regarded as stronger in London.

Likewise, an elite hospital associated with University College London or King’s College London may seem to have much more benefit than a hospital in Doncaster simply due to the fact it would likely be used by a larger number of people.

Yet unfortunately, if the North is never awarded ambitious projects because of how the ‘economic case’ is calculated, we will never attract the required investment and the great minds and research that comes along with it.

So what does this mean for the people of the North? Well unless the formula which makes up the ‘economic case’ is changed, not an awful lot. No matter how good a project is, if we keep on with the same algorithm and only evaluate information in the same way, the Green Book will keep on giving the same answers.

Having researched this issue thoroughly, I agree with many others that the Green Book should therefore have other points, such as points which measure whether a project increases life chances or helps areas develop economically. This will ensure people in the North feel valued and are given hope for new investment in their areas.

The Chancellor announced that there would be a review of the Green Book in March this year. If this review alters the way in which ‘economic value’ is measured, the Government has the chance to make a change for a whole generation. They can fix the broken promises of the past and keep to their own promise of levelling up.

I have always hated the word “entitled”, and I would struggle to say that any part of the country is entitled to anything. Yet I do believe the North deserves the opportunities for its people to shine, for its people to grow and for the prosperity of the North to at long last equal that of the South.

I was elected on a promise of levelling up, and the Prime Minister knows that Northern MPs like myself will continue to push hard for change. This should provide people across the North with hope that the levelling-up agenda is on its way.