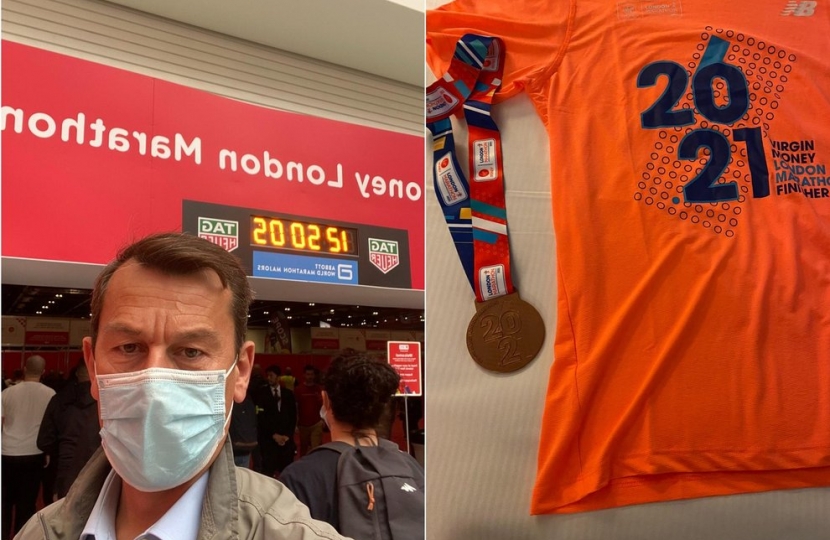 As seen in: The Doncaster Free Press

Doncaster Conservative MP Nick Fletcher has completed the London Marathon in just under five hours, confesssing after the race: "That was harder than I thought!”

The Don Valley MP crossed the line in a time of 4 hours, 58 minutes and 47 seconds – and raised more than £1,600 for his chosen charity, the Children’s Cancer and Leukaemia Group.

After completing Sunday’s gruelling route he said: “Well that was harder than I thought.”

Sharing a photo of his race t-shirt and medals he added: "Job done though and lots of money raised for a great charity. Thanks to all who have sponsored me and there is still time if you feel you can.”

Before the race, now in its 40th year, Mr Fletcher, 49, wrote on Twitter: “Not long now. Feeling excited and a little nervous.

"Sure it will be fine. All the best to everyone who is taking part. I’m doing this for a great cause.”

An avid runner for many years, Mr Fletcher said running the London Marathon had been a long-term goal for him to achieve and that he was “delighted to be running to raise money for such a great charity”.

He added: “Receiving a cancer diagnosis at any point in life is terrible and simply unimaginable for a child to endure.

“Therefore, it is a fantastic cause to raise awareness of and raise money for this charity to further their research and support in this area.”

For democracy, it is essential that we push back against toxic debate - Nick Fletcher MP

Last month was one of the darkest in our recent political history. The callous murder of Sir David Amess, a hardworking and well-respected Member of Parliament, sent shockwaves through our democratic system.