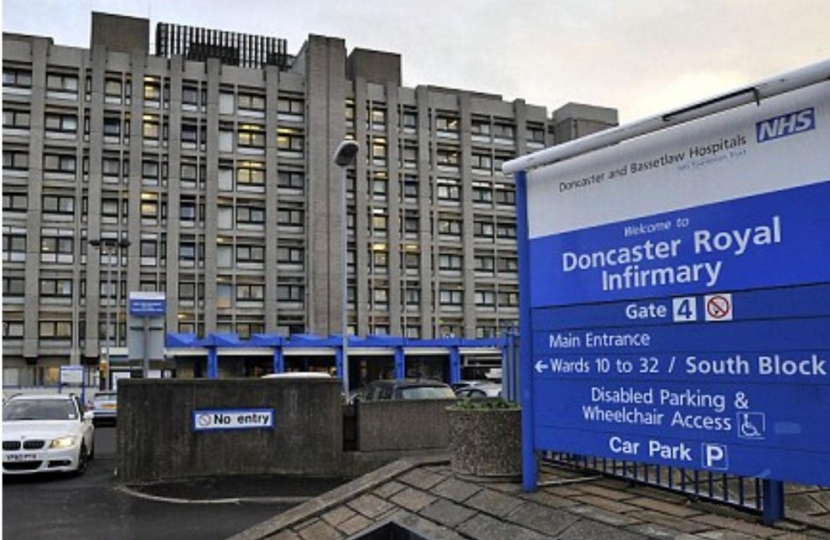 As found in: The Doncaster Free Press

A government minister has been asked to bring ‘a hard hat and wellies’ to Doncaster Royal Infirmary following a second water leak in six months as borough politicians push for a new hospital for the town.

Conservative Don Valley MP Nick Fletcher said another water leak on September 23 – following another incident back in April – showed that Doncaster should be chosen for a new hospital.

Mr Fletcher, who said the newest part of the hospital was older than Milton Keynes, raised concerns about the deteriorating condition of Doncaster Royal Infirmary following another recent leak within its Women’s and Children’s Hospital, where maternity services are housed.

He also said the hospital had a repairs backlog over £500 million.

Back In April, 67 patients had to be moved and routine procedures were cancelled after a leak in the building came into contact with the electrical mains.

Speaking in the House of Commons on Tuesday (October 19), Mr Fletcher said: “Another disaster has happened at Doncaster Royal Infirmary – this time it’s a second water leak at the Women’s Hospital.

“So with there being a maintenance backlog of £514 million pounds and the newest part of Doncaster Royal Infirmary being older than the town of Milton Keynes, does my right honourable friend agree with me that a new hospital is not a ‘nice to have’ but but an absolute necessity for the people of Doncaster?

“Would the minister please visit Doncaster Royal Infirmary? But with ceiling collapses and water leaks, he may need to bring a hard hat and some wellies.”

Minister of State for Health, Ed Argar, said he couldn’t comment on the selection process for a new hospital but would be happy to visit DRI in the near future.

Richard Parker, chief executive at Doncaster and Bassetlaw Teaching Hospitals, said: “ (The leak) occurred within the area of the east side of the building which has significant work underway to repair the facilities following an incident which occurred earlier this year.

“The water was isolated within minutes, and the source of the leak was identified and repaired within two hours.

“Thankfully, no patients, staff or visitors were harmed during this incident, and colleagues acted with professionalism throughout these challenges with minimal disruptions to our services.

“We are currently in the midst of a £12.5 million extension to the rear of this building to support capacity while the full repairs are completed. We anticipate that the new facilities will be in operation by mid-December, and will include two additional wards and a theatre unit.

“While our estates and facilities team continue to work hard maintaining our sites, most of the infrastructure at Doncaster Royal Infirmary was built in the 1930s and 1960s, with the demands of these decades in mind, as such we continue to work to realise our ambition of securing funding to build an outstanding new hospital in the town.

“The Prime Minister and Secretary of State for Health and Social Care indicated in the summer that there will be funding for a further eight to 10 new facilities in the future, and as such we have submitted an application to be part of this programme and are developing the business case to ensure that we are in the best position possible to secure this investment for the people of Doncaster and the surrounding areas.”